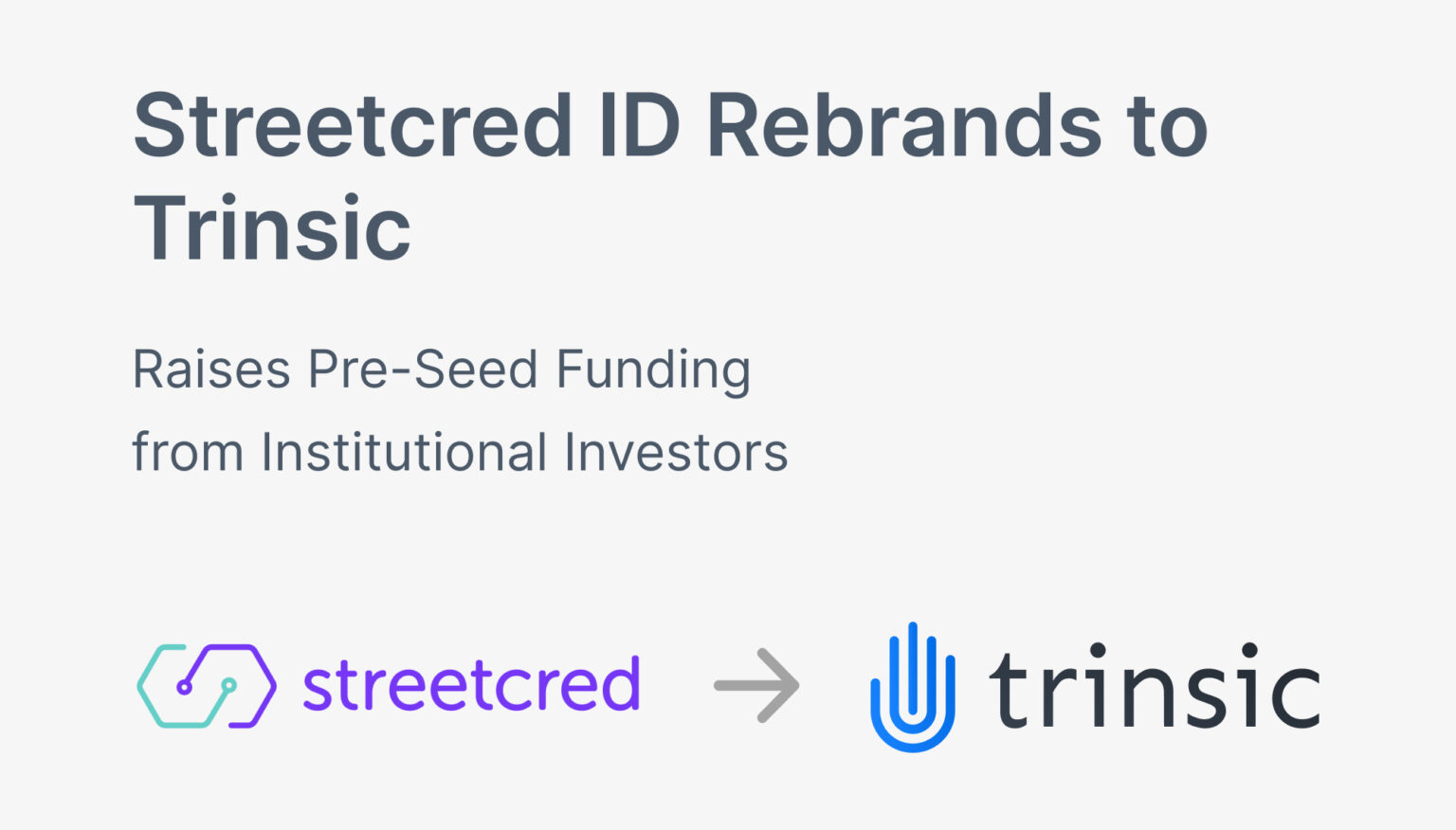 Salt Lake City, UT / June 10, 2020 / — Streetcred ID, a SaaS platform for decentralized identity, announced today that it rebranded to the name Trinsic and closed a pre-seed funding round with institutional investors. Kickstart Seed Fund (Kickstart), a seed-stage venture capital firm in the Mountain West, led the round. Trinsic is Kickstart’s first investment of its recently-closed, oversubscribed $110 million fund.

“Decentralized identity enables us to finally introduce human trust to the internet, something that has been sorely needed for decades,” said Dalton Wright, Partner at Kickstart Seed Fund. “We’ve been anxiously waiting for an opportunity to invest in this space for years, and when we came across Trinsic, we knew we wanted in. Trinsic is doing for decentralized identity what Stripe did for online payments.”

Based on privacy-first, standards-compliant, open-source tech, Trinsic has become a leader in decentralized identity in less than a year with over 100 unique customers all over the world. The company will use its first round of funding to accelerate the development of its enterprise-grade platform.

“We never expected to grow as fast as we have in such a short amount of time,” said Trinsic CEO Riley Hughes. “We’ve even seen an uptick amidst the recent pandemic—in addition to an influx of users developing technology solutions for COVID-19, we’re seeing other use cases get a boost, too. It turns out, trust, security, and privacy are more important now than ever.”

Launched in August 2019, Trinsic released a powerful API to make self-sovereign identity (SSI) easier to implement for developers. Since then, Trinsic has released a second API, a digital wallet mobile app for iOS and Android, and a web application called Trinsic Studio to continue to remove the barriers to entry for getting started with decentralized identity. Together, its products comprise a full-stack self-sovereign identity platform that supports most any use case for decentralized identity. In fact, Trinsic’s users report the platform makes issuing verifiable credentials based on the W3C standard at least 4x faster than alternatives.

“Although our name has changed from Streetcred ID to Trinsic, our mission has stayed the same,” said Trinsic CTO Tomislav Markovski. “We are using portable digital credentials to make the world’s useful services more accessible to everyone, everywhere. This funding will ensure we can continue to support the enterprises and startups who are deploying credentials in production for years to come.”

Trinsic’s founders have been actively involved in the SSI space for several years, being main contributors to the Hyperledger Aries and Indy projects at the Linux Foundation. Two of the three co-founders were also some of the first employees at the Sovrin Foundation. Trinsic continues to support the growing self-sovereign identity community as a Founding Member of the Trust over IP Foundation, a Member of the Decentralized Identity Foundation, and as a Sovrin Steward.

About Trinsic
Trinsic is a SaaS decentralized identity platform. Launched in 2019, Trinsic allows people and organizations to prove things about themselves online through portable, digital credentials based on open standards. Organizations use the Trinsic Studio to issue ID cards, health certificates, business licenses, and more. Users store these credentials securely in the Trinsic Wallet on their device. Based on privacy-first, standards-compliant, open-source tech, Trinsic has become a leader in decentralized identity in less than a year with over 100 unique customers all over the world. For more information, visit www.trinsic.id.

About Kickstart Seed Fund
Kickstart Fund is a seed-stage venture capital firm based in Salt Lake City, UT. Kickstart’s mission is to fuel the best companies in Utah and the Mountain West by providing smart capital, a connected community, and expert guidance. Since raising its first fund in 2008, Kickstart has invested in more than 100 companies.