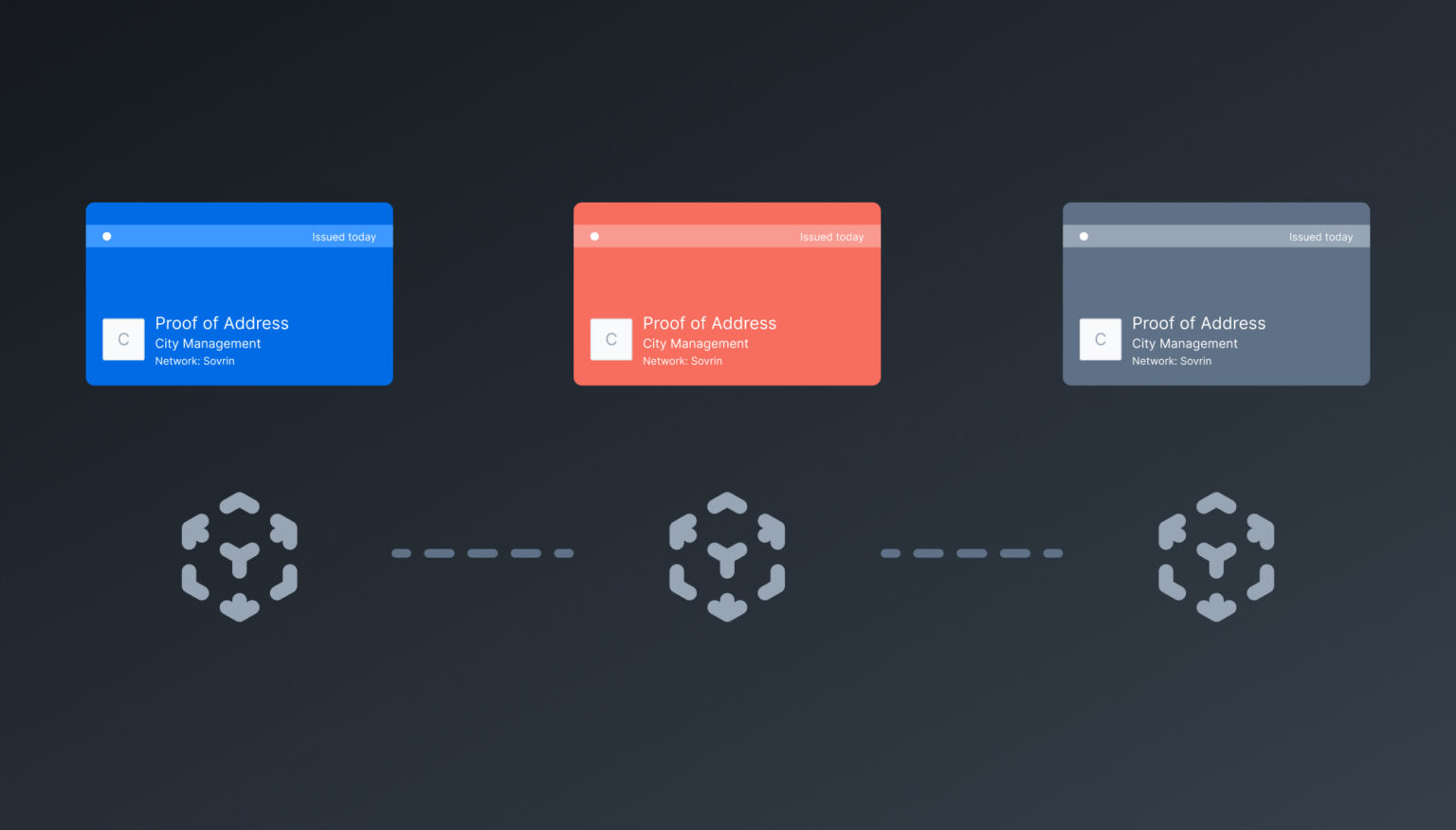 Blockchain is the least interesting thing about self-sovereign identity (SSI), and yet proponents and naysayers both spend too much time talking about it. Given the interest blockchain has garnered over the last several years, claiming other things are more interesting is not an insignificant statement. And yet it’s true; as useful as blockchain is for SSI, it’s nowhere near as interesting as:

At the end of this post, I’ll explain what blockchain is useful for, and how it catalyzed SSI.

The impact on the internet

Self-sovereign identity is a movement based on the premise that digital identity should be as legitimate and nuanced as a person’s human identity, while being accessible to all, privacy-preserving, and not reliant on a single government or corporation.

Think of self-sovereign identity like a coin with a philosophical premise on each side.

Like the serfs of medieval Europe who depended on their feudal lords for existence, we too have relied on technology monoliths to provide our digital existence. Eventually, the Renaissance broke down feudal structures and gave way to an ever-more egalitarian society. Likewise, self-sovereign identity gives people an independent digital existence wherein they have complete agency, and outside of which they negotiate as peers. In an age when data is power, this is more important than ever.

For example, imagine a world where your physical wallet isn’t held by you, but by a corporation; using a card, license, or other document would require authentication and permission from that company. A representative from that company would need to be present everywhere you want to use your wallet, from traffic stops to bars, from your school library to the TSA, and everything in between. While this might sound ludicrous at first glance, this is the way we live online right now, and it’s the reason big tech is boiling in antitrust hot water.

Because we control our own real-world identity, we can independently engage in transactions with peers. With sufficient paper documents, ability to travel, and legal protections, just about anything I’m eligible for is accessible to me¹. This is the kind of place the internet can become, too, but with added privacy and convenience superpowers. It’s hard to overstate the impact of this change, and surely it will evolve in ways we can’t predict. But like the Renaissance’s effect in the West, SSI will surely empower people everywhere² and make the internet a better place.

The benefits of technical standards

Technical standards unlock vast amounts of value when adopted. Take the Bluetooth standard for example. How many different kinds of headsets, speakers, and connected devices have been created because of bluetooth? Bluetooth created a marketplace for cordless, connected devices, giving consumers choice of product and preventing a single monopoly from forming. We can also look at the SMTP standard that allows email to be sent to and from any number of different email providers. It’s hard to imagine the world without these and many more important standards.

Historically there’s been no standard way to exercise one’s extrinsic identity online. Think about it: How would you prove your legal name online? Or that you live at a certain place or graduated from a certain school? Or even that you’re a human? This is precisely the purpose of a new standard: verifiable credentials. But beyond providing a standardized way to prove things online, verifiable credentials actually have the potential to revolutionize the exchange of data globally, between all kinds of stakeholders.

In his recent piece on how verifiable credentials are really more like verifiable containers, Timothy Ruff explains how shipping containers standardized a container that could transfer seamlessly from boat to train to truck which reduced shipping costs astronomically (ie, interoperability between vehicles). Verifiable credentials promise to bring as revolutionary a transformation to the data economy as shipping containers brought to logistics. The sources, subjects, and recipients of data in an ecosystem enjoy interoperability and avoid being locked in to a particular vendor or process.

Standards always take some time to catch on, but when the infrastructure investments and adoption mechanisms reach their inflection point, there will be an explosion in innovation and adoption, which is the third awesome thing about self-sovereign identity.

Suppose you wanted to engage in a digital transaction wherein you’ll receive some special service if you can prove that you’re a veteran. How would you do it? The time and effort required to come up with such a proof, and the work by the counterparty to verify your claim is legitimate, are considered transaction costs. If transaction costs are greater than the perceived benefit of the service, the transaction will never be completed. But if transaction costs can be reduced, transactions will increase commensurately.

This is what happened to the ride-hailing industry when Uber & Lyft entered the market. In 2010, taxis and limos controlled a $4.4B market in the USA. Uber entered the market to accomplish one purpose: reduce transaction costs to hail a ride. Uber made it easier to find a ride, increased the trust in the driver, made fares transparent/upfront, and took care of the payment, all of which reduced the transaction costs for getting from point A to point B. By 2019, the ride hailing industry exploded to a $44B industry — a 10x increase in total market size, just by reducing the costs to transact in that market³.

Likewise, when it’s easy to prove things about yourself and verify things about others, the already massive $6B identity verification market and $10B identity & access management market will explode into massive, multi-hundred billion dollar ecosystems.

But the truly incredible opportunity lies in a little-understood theory about network effects. Network effects are typically understood as the increased network value provided to its participants as the number of participants increases. Metcalfe’s law, Reed’s law, and other theories seek to explain this mathematically.

Dr. Sam Smith wrote a tremendous paper that takes this analysis to another level; when two separate networks can cooperate, the combination of the two networks can be greater than the sum of each. In other words, if the networks can share a common utility, the growth of one network benefits the other. Let’s look at an example of this.

In the early days of the internet, the growth of Match.com, WebMD, and Yahoo contributed to the growth of Amazon. Why? Because Amazon’s biggest barrier to growth wasn’t the supply of books, but the number of people who were online⁴. As more users accrued to Match.com, many of those users would also end up browsing Amazon. The growth of one network (Match.com) contributed to the growth of another network (Amazon) because they share common utilities (internet connection, personal computer, etc.). And as the networks of each application grew, the underlying protocol network (the internet) grew as well, which caused new applications to appear. This is the power of building on a protocol with common utilities.

What this means for innovators

Any products that are built on top of SSI protocols today will gain value in two ways:

That means if you’re building an SSI app to optimize food supply chains, your app will benefit from the efforts of companies building more secure medical records management, and that will benefit from improved KYC in financial services, and so on.

Your business will grow just because it exists provided other businesses are built on SSI. The time to build the world’s next billion-dollar companies is now. Trinsic is the best platform to get you started fast & scale with you.

So how about blockchain?

Blockchain is just a technology. Technology is not interesting in and of itself because it is a means to an end—the interesting question will always be what does this technology enable me to do.

What does blockchain do in SSI?

In well-architected self-sovereign identity architectures like Sovrin and Veres One, the blockchain is used primarily as a decentralized public key infrastructure (DPKI) for identifying credential issuers. Thoughtful skeptics point out that existing PKI systems could be substituted, and blockchain could be removed altogether — which is true. In fact, in a former blog post, I explained:

…the traditional DNS system complete with certificate authorities and ICANN could accomplish much of what is done with decentralized identifiers and the blockchain. But that infrastructure is decades old and comes with its own cost, scalability, performance, privacy, data protection, and governance implications. Using DIDs on a blockchain comes with a different set of trade-offs.

Implementers can make their own decisions on tech stacks, and there is a reason so many choose DIDs. So the blockchain gives us useful functionality, but isn’t necessary for SSI.

So why the blockchain reputation?

I think there are three primary reasons why self-sovereign identity has a reputation for being tightly coupled with the blockchain/cryptocurrency community.

As SSI technology and policy thinking has evolved over the last five years, so too has the role of the blockchain. With innovations in DID methods (peer DIDs especially), KERI, JSON-LD, etc. we take for granted the small role blockchain need play in SSI today.

I want to conclude by saying that blockchain’s contribution to SSI is immeasurably large but not because of its merits as a technology. Rather, blockchain reopened the identity conversation again, giving people hope in a better internet. Specifically, as co-founder of the Internet Identity Workshop and author of the book on digital identity Phil Windley put it:

“Blockchain convinced many people, myself included, that decentralized identity was possible and practical. There was suddenly hope for a path to human dignity online.”

So while blockchain’s relevance today is much less than it once was, its impact persists. We wouldn’t be talking about the impact on the internet, the standards, or the economic opportunity if it weren’t for blockchain. And now, with adoption all over the world, decentralized identity now seems inevitable.